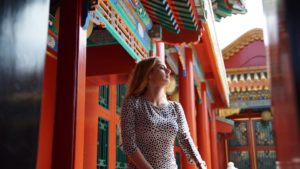 IOANA has one of the most versatile portfolios in to the entertainment industry .  Starting as a radio host and begining her directing career as a concert stage director, to  an award-winning music video director and upgrading to  television and documentary  director, producer and host, emerging in to digital media.

Before directing and producing documentaries and music videos, IOANA was a radio DJ and host that quickly became known and loved by the public. Starting presenting different radio programs at the young age of 8 years old, her radio career gained her a lot of recognition and pupularity.  As a teenager, Ioana’s radio shows gained attention and pupularity and soon enoght Ioana started to collaborate with  MTV Networks as a host ( VJ ).

In 2008, IOANA announced on her own live radio program that  her radio and tv career is soon to be over as she had an interest to continue her studies and pursue a carrer as a documentary director and producer.

Award-winning director and producer with a solid understanding of the entire filmmaking process, from both technical and creative points of view. A solid working knowledge of film & television production techniques used on set, in studio, and in the field.